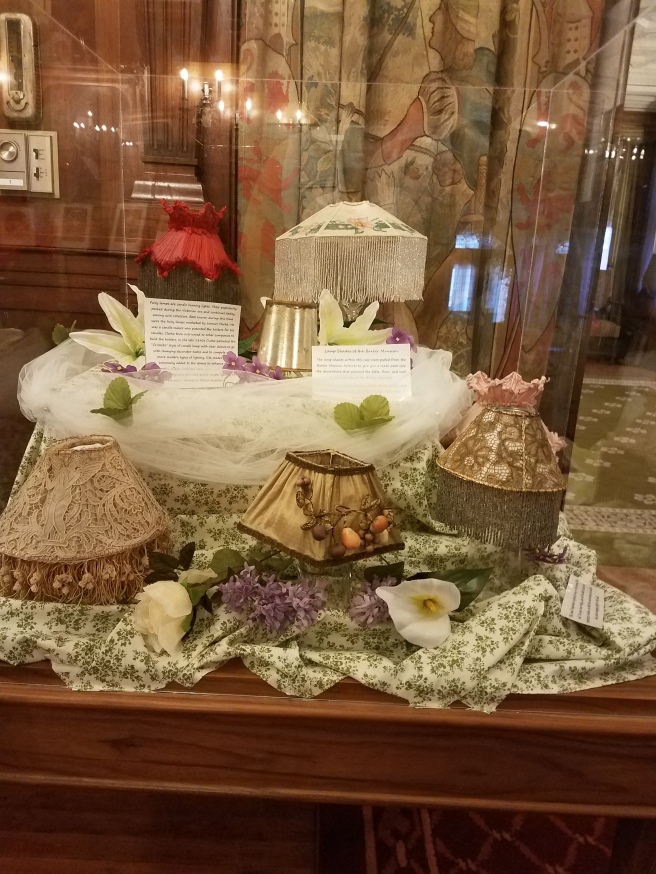 As visitors walk through the Barker Mansion during tours, they view many things such as marble fireplaces, beautifully carved woodwork, hand woven tapestries on the walls, and stunning light fixtures scattered throughout the rooms. However one thing visitors may notice missing are the lampshades that were commonly seen on light fixtures and lamps of Victorian and Gilded Age mansions. The lampshades that hung in the Barker Mansion were typically made of silk and other delicate fabrics with elaborate stitching or beading to enhance the elegance of the room they were in.

Currently on display in the foyer are eight of the original Barker lampshades. These lampshades were taken from the rooms they hung in and moved to the archives a number of years ago. They will only be on display for a short time to prevent the silk from becoming damaged.

Among the lampshades within the case, are two with a rather interesting history. The first is the small red lampshade that sits in the back left corner that has the stamp “Cricklite” on the inner rim. Also in the case is an almost identical pink lampshade that has only three differences: the color, the size, and the absence of the “Cricklite” stamp. These two lampshades, as well as several others in the case, are covers for fairy lamps. They were candle burning lamps that peaked in popularity during the Victorian Era. The most well known in the business of fairy lamps was Samuel Clarke, who was a candle maker who patented the holder for his candles. He outsourced the production of the candle holders and lamps to other companies and was a genius in advertising. Clarke protected his patents fiercely, but that did not stop other companies from copying as much of his design as possible. The red lampshade that has the “Cricklite” stamp is one of Clarke’s design. The pink lampshade is a well made copy from one of his competitors. The Barker Mansion Archives also currently hold three more red “Cricklites” and four yellow “Cricklites”. The yellow shades hung in the foyer through the years but are unfortunately not able to be displayed due to their poor condition.

The lampshades on display represent only a small number of the total that exist in our archives. The ones chosen for this case were chosen not only for their excellent condition, but also to show our guests the variety in lampshades that were utilized during the Barker’s time. Make sure to check out this temporary exhibit during your next visit to the Barker Mansion!